You can pay for paintings by transfer bank or PayPal with victoritadutu@gmail.com 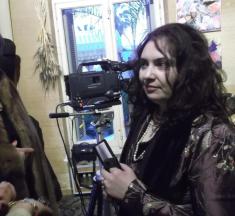 Victorita Dutu is a graduate of Faculty of Mathematics, 1995, and Faculty of Philosophy, 1999, of “Al. Ioan Cuza ” University in Iasi. She is a tenured Mathematics teacher at the Traian High School in Bucharest. She won poetry awards and had painting exhibitions all over the country and abroad. In Mathematics, she is passionate about Infinite-Dimensional Spaces. She published English books in America. She published Romanian and English books on Amazon.

Victoria Dutu will take part in the Festival of sacred art in France which will take place in April 2020, in the cathedral of Saint Peter the Apostle in the city of Senlis near Paris.

*Ambassador of Peace, within the International Peace Organization since January 8, 2011. *Honorary Member of Maison Naaman pour la Culture – Lebanon, as well as of several poetry societies from various countries. She exhibited at New York Artexpo Pier 94, one of the world’s largest art fairs, in 2015, at the Oxford International Art Fair 2015, at the Brick Lane Gallery in London, in Vienna, Austria, at Time Gallery, in 2014, at Chouzy-sur-Cisse, in the heart of France, at the “Matra” musée and the “Jacques-Thyraud” Library, in 2014. She also exhibited in Sanremo, Italy, during the Festival, at the “La Bonbonnire” Gallery, in 2013, in Poland and Switzerland, in 2007.

Victorita Dutu is a graduate of the Faculty of Mathematics and Philosophy. She has won prizes for poetry and art in her country and inabroad. She realized painting exhibition. She exhibited at New York Art Fair, Miami,  Carroussel Louvre Paris, Rome, Florence, Venice, Cannes, Artexpo New York , Oxford , London , Vienna, Chouzy-sur-Cisse, central France, Sanremo, Italy, during the Festival, Poland and Switzerland, Romania.

Victoria Dutu will take part in the Festival of sacred art in France which will take place in April 2020, in the cathedral of Saint Peter the Apostle in the city of Senlis near Paris.

Victoria Dutu publishes the novel “LUMINILE DRAGOSTEI” in Romanian and English “LIGHTS OF LOVE” on Amazon and in Bucharest.

“INTRE TOACA SI CLOPOT” in Romanian and in English “THE SOUNDS OF THE BELLS” on Amazon and in Bucharest.The book is a dialogue between science, philosophy, life and love for the neighbor, the world and God.

Victoria Dutu attends the Book Fair at MIAMI Florida USA, November 16-18, 2018, with the novel “Gabriel” in English, with ten other books translated into English and with a small picture exhibition, with the works used as covers on their own. books.

-Published in November 2017 the book of philosophical-religious meditation “Anonymous”

– Publication in the United States of America at “AuthorHouse” “THERE IS A YOU” – volume of English poetry with 25 paintings by the author. July 2017

-Sublishes in the United States of America on “AuthorHouse” “POWDER OF LOVE” – a volume of English poetry with 25 paintings by the author. May 2017

Organized by the Honorary Consul of Romania,

(from the cycle “THE ONE THAT I SHOULD BE “)

On which I have fallen

Afraid of a dream

Was holding my hand

I don`t know what made me today

Resemble to a violet tree

Having green and blue flowers

And it seemed that

The wind was whispering me

I could not utter.

This site uses Akismet to reduce spam. Learn how your comment data is processed.